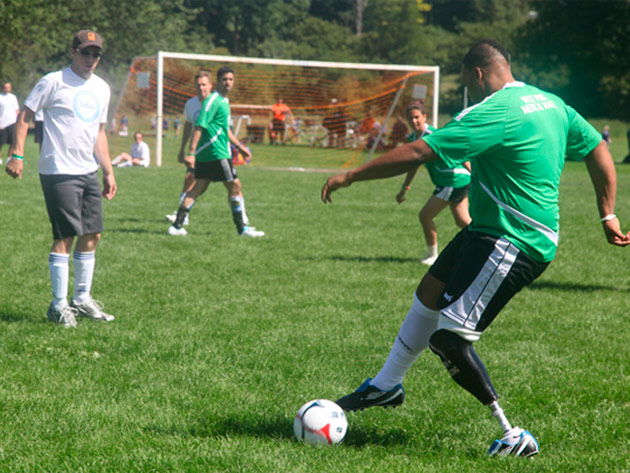 Festival of Football arrived on the Canadian sporting landscape in triumphant fashion, earning accolades from participants and establishing the inaugural event as a vital new fundraiser that will be around for years to come.

The day-long celebration of soccer raised funds and awareness in support of West Park Healthcare Centre Foundation’s $100M “I CAN” campus redevelopment plan, and drew players from across the Greater Toronto Area and as far away as Ottawa and Michigan.

“This was Canada’s largest grassroots soccer fundraiser and the only event of its kind in North America,” said Mike Fenton, Executive Director of West Park Healthcare Centre Foundation. “As a first-time event, everything went incredibly smoothly and participants repeatedly said how much they look forward to building on this success for an even bigger celebration of soccer next year while also raising dollars for a good cause.”

The numbers were impressive for the first edition as nearly 60 teams and 600 players played 140 matches amid ideal weather and picture-perfect fields at Eglinton Flats on August 18.  Teams comprised of recreational soccer players, physicians and even amputee patients played games on mini fields creating exciting highly-competitive matches.  In the end, Festival of Football achieved its mission proving soccer, like other sports, can improve the lives of people in our community.

Festival of Football was a soccer celebration for the senses on many fronts.  Along with high-intensity fast-paced games, participants enjoyed a variety of interactive activities, including the popular speed kick, soccer VIP meet-and-greets, soccer celebrity interviews, autograph signings and music from Jerry Jerome and the Cardells and Jim Armstrong and the Sonic Deli.  The work of West Park was also on display as amputee patients Heather Cowley, Jason Naval and Jamoi Anderson played in the media-celebrity-patient match featuring Toronto soccer media and members of the music band Neverest.

While no championship or prize money was at stake, the true winners are the present and future patients of West Park Healthcare Centre.  One participating team will, however, be rewarded for their fundraising efforts as organizers will award the grand prize of an all-expenses paid trip for the entire team to a UEFA Champions League match in Europe this fall.  Proceeds raised to date will help fund the campus expansion, but more is needed to make the project a reality.  Anyone interested in contributing to the “I CAN” campaign can make a donation at www.westpark.org.

“It is so important what the participants contributed in both fundraising and their time - it affects people lives,” said West Park patient Cyndi Desjardins, a mother of two and a quadruple amputee, who reclaimed her life thanks to the work of West Park.  “It’s giving people a chance to recapture their lives after an ordeal and start a new and incredible journey like the one that I’ve started.  I hope people continue to donate to West Park so they can help others live meaningful productive lives well into the future.”

The second edition of the annual Festival of Football will take place in summer 2013.  Interested players can visit www.festivaloffootball.ca over the coming months for news and registration information.