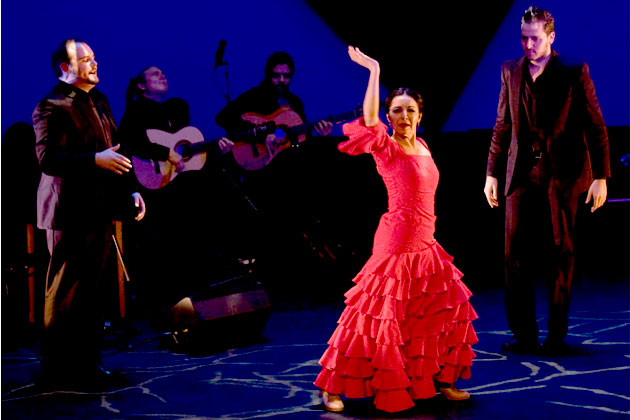 Celebrates 30 Years with World Premiere!
Aguas /Waters
Esmeralda Enrique Spanish Dance Company (EESDC) celebrates its 30th Anniversary with the world premiere of Aguas / Waters featuring Juan Ogalla of Spain who received the 2011 Dora Mavor Moore Award for Outstanding Performance for his stellar performance in last season's Espejo de Oro / Mirror of Gold. Choreographed by Artistic Director Esmeralda Enrique and Ogalla, this evocative evening, a celebration of the element of water, runs April 19 to April 22 at Fleck Dance Theatre as part of Harbourfront Centre's NextSteps series.
Water: a powerful life source that cleanses and nourishes the world. In this vibrant new flamenco work, water becomes the object through which everything becomes transformed by its eternal process of creation and destruction. Humanity evolved because of water – drinking it, cleansing with it andconfiding in it all our anguish and pain.
The company's exquisite and powerful dancers – Esmeralda Enrique, Paloma Cortés, Ángela del Sol, Ilse Gudiño, Noelia La Morocha – are joined by such consummate guest musicians from Spain as guitarist Oscar Lago and singers Niño de Elche and Manuel Soto (who both won over the audience last year in Espejo de Oro / Mirror of Gold). EESDC stalwart and multi-Dora nominee Nicolás Hernández returns as Musical Director and guitarist with Toronto-based musicians Chendy Léon (Cuban percussionist who performs with Jesse Cook and Hilario Duran and now makes his debut with EESDC) and Chris Church (violinist who makes a welcome return to EESDC) completing the musical line-up.
Thirty years ago, a young woman from Texas came to Canada after spending 13 years in Spain perfecting her artistry as a flamenco dancer. The award-winning Esmeralda Enrique Spanish Dance Company was founded in 1982 in Toronto under the artistic direction of Esmeralda Enrique. Dedicated and driven, the talented musicians, singers and expressive, commanding dancers perform finely wrought pieces that hold – in perfect balance – tradition and a modern, contemporary aesthetic. Capturing the essence of flamenco, the Esmeralda Enrique Spanish Dance Company never fails to mesmerize their audiences while bringing to life the contagious excitement and full breadth of feeling that this passionate art delivers.
Esmeralda Enrique is one of the most celebrated flamenco dance artists in Canada. Lauded internationally as a performer, choreographer and teacher, she has received four prestigious Dora Mavor Moore Award nominations for her performances and choreographies. She grew up in the flamenco tradition and her performance career began at age fourteen. She toured North America with the famous company of José Greco and has appeared throughout Europe, the Middle East and Mexico with the distinguished dance companies of Paco Ruíz, Miguel Sandoval, Antonio del Castillo, Sara Lezana and Cristóbal Reyes. In 1982 Ms. Enrique immigrated to Toronto and founded the Academy of Spanish Dance and the Esmeralda Enrique Spanish Dance Company, renowned for its innovation, versatility and artistic excellence. Enrique reveals in her work a total mastery and love of the art. The stars that aligned to bring Esmeralda to Toronto changed the legacy of flamenco in Toronto and in Canada. Undoubtedly her spirit and energy over the last thirty years have helped make flamenco a vibrant, driving force on the Canadian dance landscape.
"Flamenco has shaped my life's history. It is my great passion. It excites my mind and comforts my spirit. It is the language of the soul. Through flamenco I find truth, beauty and goodness. Flamenco is a way of life that permeates my personal and professional life through its philosophy of honesty, dignity and integrity. I believe that one does not have to be a performer to be 'a flamenco.' A flamenco is anyone who is emotionally and actively involved in this philosophy. The art of flamenco is merely the outward expression of the flamenco way of life," says Enrique.
Flamenco is a living, ever-evolving art, inspired and influenced by the world. The flamenco trilogy of dance, song and music combine to form a harmonious and complex trio that is integral to an authentic presentation of flamenco. The choreographic process of flamenco takes all three into account at once, as dance, guitar and voice must each fluidly support each other. Through this integration, the breadth, depth and sincerity of emotion that is central to a shared experience emerges. It is this universal human connection that makes flamenco an art that is universally understood. Enrique and her exemplary company of dancers and musicians never fail to rouse the passions of their audience as they capture the mood and soul of traditional and contemporary flamenco.
"Terrific. The dancing, the music, the singing Š   Juan Ogalla cuts the air with whiplash turns Š"
– Michael Crabb, CBC Radio One, Here and Now (about last season's Espejo de Oro / Mirror of Gold)
Esmeralda Enrique Spanish Dance Company Celebrates 30 years with the World Premiere of Aguas / Waters
Choreographed by Esmeralda Enrique and Juan Ogalla
Thursday, April 19 to Sunday, April 22, 2012. Thurs – Sat at 8 PM, Sun at 3 PM
part of Harbourfront Centre's NextSteps 2011-12 at Fleck Dance Theatre, 207 Queen's Quay West, 3rd Floor
Tickets: $25-$43 (Discounts for students, seniors, CADA and NextSteps subscribers)
Box Office:  416-973-4000 or visit www.flamencos.net
Publicado: 29 de marzo, 2012